Anyone who knows me, knows that fishing is not my favorite thing to do. It's kind of a time suck. I could be working, hiking/exercising, writing, reading. Essentially anything else other than fishing. Ever since Cori got into fly fishing last August she's been begging me to try it. Today, I agreed to go on a guided trip through Circle Valley Anglers. Admittedly I was kind of excited.

Our guide Lenny, took us to Mammoth Creek. The creek meandered along the backside of some private homes, down some dusty dirt roads in the middle of nowhere town Utah.The sun was shining, and the river was peaceful. It was a beautiful day.


I was a bundle of nerves because I had no idea what I was doing. Lenny gave me some instruction; do this, do that, at the same time do this, oh and be ready to set the hook. My introverted little brain was spinning in circles. Information overload. Still, I somehow managed to kind of do what he said and within our first 30 minutes I caught my first trout ever, a brown trout. "How do you feel?" Cori asked. "I have slightly mixed feelings." I have to admit that it was fun to catch a fish, but I still feel like fishing is kinda mean...How would you like to get yanked around by a hook in your mouth? Your life would suck. Still, I eat fish so I can't be too preachy about it. 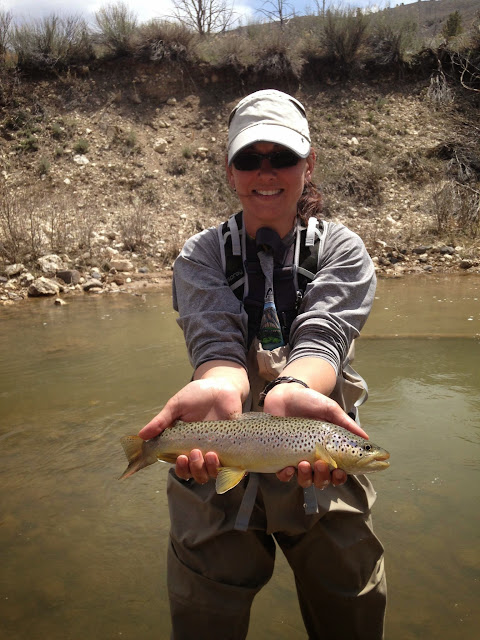 By this time Cori had already caught a monster of a Brown. 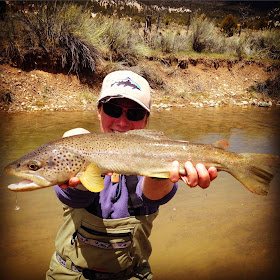 And then that was it. Over the next three hours we moved up the creek. I hooked another one but lost it. In the meantime Cori landed four more trout. Not surprised.

I very much enjoyed Lenny, our guide. He made the day for me. I definitely have not caught the fishing bug. Unless I'm catching fish, it's just not a whole lot of fun.

I have promised Cori, and I am publically stating, that I have agreed to go on day hiking trips that involve fishing; and I will fish. Shocker I know. I'm not talking about some one mile sissy hike either. For most fishermen/women hiking is a byproduct of fishing; they have to hike to get to a certain spot. No way. I'm a hiker first, and a fisher second. If there's a third option for the day it will get bumped up over fishing. But I'll do it, so don't be surprised of I start blogging about hiking and fishing. It just may happen.

The guided trip included a three day fishing license so we couldn't let that money go to waste. We spent the next two days fishing. One spot near Capitol Reef NP on the Fremont River that was actually running low (ankle deep). The fish were plentiful but easily spooked. So, we drove to a nearby creek called U.M. Creek that feeds into Fish Lake instead. There the water level was kind to us and we landed some finned friends. I caught two tiny rainbows and a very tiny brown. Cori caught a fat rainbow that pretty much took her for a swim. 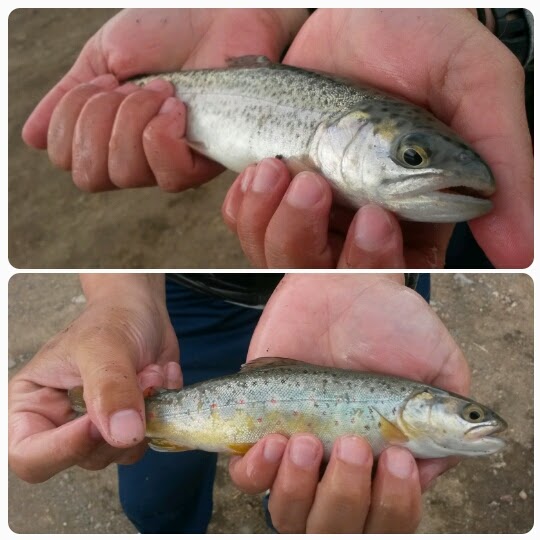 Two of my baby trout 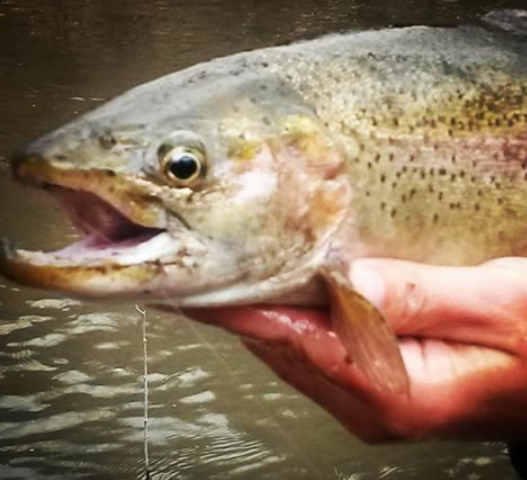 That night we drove toward Moab in search of a place to sleep. We kept passing signs for Green River, and we both kept commenting that the name rang a bell. For me, the Green River was a conservation issue. The river is an upper tributary to the Colorado River, which, is experiencing historically low water levels due to water diversion, daming, agricultural use, and of course a substantial drought. To be more exact, approximately 90% of the Colorado River and it's tributaries (i.e. the Green River) is diverted for some type of human use. In other words, it's disappearing at an alarming rate.

For Cori on the other hand, the Green River meant trout. Big, ginormous trout. Surprised? I thought not. To her credit, despite the shrinking water levels, the Green River in Utah is touted to be one of the best tailwater fisheries in North America, and we were only five hours away. So after much discussion we decided we would spend the next day at Arches National Park and then head north toward Flaming Gorge Dam for one last hoorah before heading home.

We arrived at Dripping Springs campground late, setup camp and slept hard. I awoke at 5:30am to the sounds of coyotes serenading in the distance, but managed to fall back asleep for another hour.

We stopped by Trout Creek Flies
in the morning for coffee and breakfast and to consult with the fly shop about locations to fish. Soon after we hit the
water. The river was crystal clear and we could see huge Browns and Rainbows rising to the surface. Everywhere. They were everywhere. And we couldn't catch a single one for two whole hours. Ughhhh.

Finally, Cori and I figured out a few different patterns that worked and she land the most beautiful brown trout I've ever seen. Shortly after that she landed a rainbow on a dry fly. Unfortunately for me, I hooked two but lost them both. Sad times. 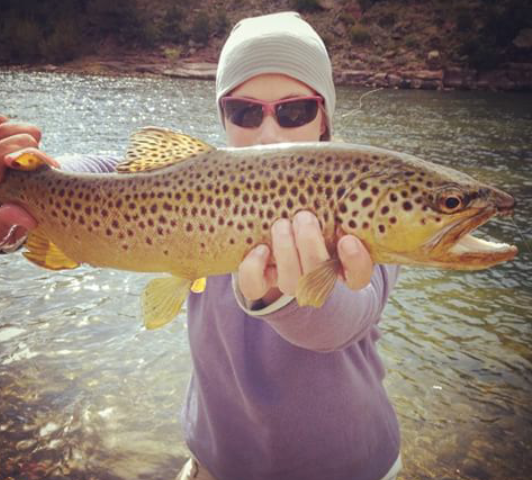 Just as we had things figured out thunder was rumbling overhead. It was time to leave so we headed back to the shop to use the facilities and grab some lunch.

We were greated by the gentlemen who helped us out earlier that morning. Cori got to talking with Steve, the manager, about how the morning went. She showed him the pictures of the fish she caught and without skipping a beat he responded, "You're hired."
"What?" Cori responded. "You're hired. I need someone in the fly shop this summer. You both could work. We need help." The next thirty minutes were kind of a blur of job applications and housing discussions but we essentially left there with a job for the summer. Unbelievable. Everything isn't set in place yet but unless there's some huge hang up Cori and I will be spending the rest of the summer in the middle of Ashley National Forest along the green river. I can't wait!
rralbritton at 10:23 PM
Share